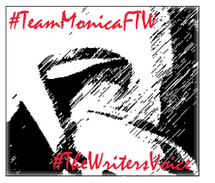 “The Writer’s Voice” is a multi-blog, multi-agent contest hosted by Brenda Drake, Elizabeth Briggs., Kimberly P. Chase, and me. We’re basing it on NBC’s singing reality show The Voice, so the four of us will serve as coaches and select projects for our teams based on their queries and first pages.

We also had guest coaches this year, and I would like to give a special thanks to Stacey Lee, author of UNDER A PAINTED SUN (Putnam 2015), for helping Team Mónica this year! Here’s Stacey’s Twitter account, and her website!
Also, many thanks to the participating agents:

Plus two secret ninja agents who will be requesting too!

Voting will stay open until 9:00 a.m. EDT on May 23, at which point we’ll determine which coach’s team received the most votes. That coach will win bragging rights for time immemorial, and everyone who received requests will be able to submit their materials to all the agents who voted for them. These votes represent serious interest in your project, so PLEASE DON’T ACCEPT AN OFFER OF REPRESENTATION BEFORE GIVING “THE WRITER’S VOICE” AGENTS AN OPPORTUNITY TO MAKE A COMPETING OFFER.

To read the other teams' entries, please use the following links:

Without further ado, I present to you, MY AMAZING TEAM:

Lastly, cheerleading is allowed, but only until Wednesday! We want to leave the comments free for the agents to vote on Thursday. (Also, we will only allow, well, cheerleading and/or positive feedback. Please don’t critique the entries before the agents vote. On the flip side, please don’t try to convince the agents that they want to vote for one of your favorites or, you know, threaten to douse the agents in silly string if they don’t vote for your critique partner. This is a silly-string-free site.)

Happy reading!
Posted by Unknown at 8:08 AM No comments:

Eleven-year-old Jackson Solis lost his legs when he and his bicycle tangled with a fast-moving SUV. Now he’s a test case for state-of-the-art bionic replacements. They’re faster and stronger than his old legs, but he’s not impressed--he just feels like a robot freak boy.

He keeps the bionics a secret so no one will know how different he really is. Only his parents and best friend know the truth--everyone else believes he wears ordinary prosthetics. But keeping secrets is exhausting and so is the recovery from his accident. The only fun he’s had lately was deciding to name his legs “Steve” and “Austin” after the main character of an old TV show about a bionic man.

Then Jackson overhears that someone’s trying to sabotage the high tech helicopter spy gear that his father, an Army colonel, is testing. If the tech is destroyed, his dad’s career will nosedive, and they’d probably have to move. Jackson would lose his best friend and everything he has left that’s normal. He knows the adults would never agree to his plan, so he decides to keep one more secret--he’s going after whoever’s behind the trouble. After all, no one else can chase a bad guy faster than the kid with bionic legs.

FIRST PAGE
Back when I was in second grade, my class went to see Slim Goodbody. You know, the guy with the stage show about being healthy, where he wears that shirt that shows all his internal organs? I thought it was pretty cool.  My parents also saw his show when they were young, which means he’s ancient.
Anyway, he said this one thing I can’t get out of my head now: “If you hurt yourself, you can’t just go to Buddy’s Body Shop to replace your parts.”
Shows you how much he knows. Because that’s exactly what my parents were talking about right now, while they thought I was sleeping. In the last few days, it’s all they EVER talked about.
“But what if his body rejects them?” My mother was asking the doctor more questions from her endless list. She can’t help it; she’s a journalist, and for her, asking is like breathing. “He’s only eleven years old. Isn’t he too young for something this experimental?”
“We don’t believe he will reject them, Mrs. Solis,” answered the doctor. “We will grow skin and nerve grafts from stem cells. The process is extremely successful at reducing the chance of rejection.”
Gross. They were talking about growing skin. But, also, kind of cool. For a minute, I forgot they were talking about my skin and wondered whether I could watch them do it.
The doctor was still talking. “The fact that he’s eleven makes him an excellent candidate for this trial. He stands a very good chance at adapting well—physically, emotionally, and mentally—to the new limbs.”
Posted by Unknown at 8:07 AM 5 comments:

Team Mónica #2 POTHOLES ON THE ROAD TO NIRVANA (YA)


POTHOLES ON THE ROAD TO NIRVANA
Realistic YA
62,000 words

At sixteen, Jason is ready to end his life. In the year following a chance encounter with Kurt Cobain mere days before Cobain killed himself, Jason realizes he might have more in common with the singer than passion for music. Undiagnosed bipolar tendencies have left Jason isolated, but when the love of his life moves on with his former best friend, he takes to the road. If he can make it to Seattle and retrace Cobain's final days, maybe he can stop himself from following his idol's footsteps to an early grave.

Several states over, sixteen-year-old J.D. is ready to get a life. He's tired of living in the shadow of an older brother who committed suicide, leaving his mother catatonically depressed, and his father . . . well, if he knew where his father was, life would likely be very different. When a sombrero-wearing-Christmas-elf card arrives with Dad's return address and all, it's time for an old-fashioned road trip. J.D. isn't looking for help so much as a way out. If Dad will agree to take Mom off his hands, an independent life outside the shadows may not be such a ridiculous idea after all.

Two guys running from the long-term side effects of suicide, destined to cross paths. If either stands a chance of living a happy life—or any life at all—they'll first need to lower their walls and accept the help offered along the way.

Mom was awake, if you could call it that. The sun had barely broken over the roof of our trailer, but from where I stood in the yard, I could see her through the window gearing up for another busy day. She sat on the couch, her ratty nightgown on. Existing, breathing, staring. Yep. That was one packed schedule she was working on for sure.
Ugh. Here I was being sarcastic as snot yet again. I’d sworn to myself this morning I’d be a better person than that. If I was failing at it already, I was even more hopeless than I thought.
I couldn’t let this mood follow me inside. It wouldn’t help. I climbed the steps to the porch, shifted the grocery sacks to one side, and then fumbled with the lock.
"Mom, I’m—" Before I could get the rest of the sentence out, my boot caught on the loose threshold I’d been meaning to fix for ages. With all the grace of a two-legged giraffe, I stumbled into the living room, slamming my elbow hard against the wall in the process. Three boxes of mac and cheese tumbled out of one of the overstuffed sacks, but I somehow managed to stay upright without dropping the eggs or smashing the bread. "—home," I finished with a less-than-manly whimper, kicking the door closed behind me. "No need to get up or anything. I've got it all under control."
And okay, so maybe the sarcasm did help a little. My better-person-building would just have to wait until after my elbow quit throbbing.
Posted by Unknown at 8:06 AM 3 comments: