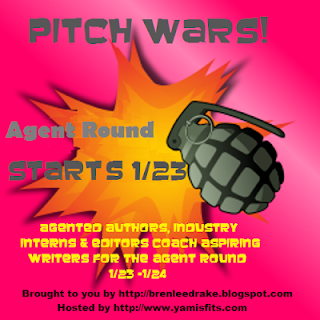 The agent round for PITCH WARS brought to you by Brenda Drake is happening now over at the YAMisfits blog. Hop over there and follow them and view the agent round January 23-24 pitches. The talented panel of agented/published authors, industry interns, and editors have worked for over a month with their teammates to help get their pitches and manuscripts ready for some fabulous agents. To view the teams go here, and for a list of the awesome participating agents go here.

ALTERNATES SHOWCASE! As a special reward for waiting in the wings, we are putting the alternates on a few host blogs and inviting agents to stop by and make requests. ALL AGENTS ARE WELCOMED TO PARTICIPATE IN THIS EVENT.

Here are the blogs hosting the alternates' pitches:

TWITTER PITCH PARTY! For those of you who didn't make it into Pitch Wars, there will be a twitter pitch party on the hashtag #PitMad on January 25 from 8AM to 8PM EST. So get your twitter pitches ready and make sure to include the hashtag in your 140 character count. The rules are: be polite, any genre can be pitched, and pitch each time you see an agent on the hashtag (pitch continuously throughout the day). ALL AGENTS ARE WELCOMED TO PARTICIPATE IN THIS EVENT.

Scroll down to view the pitches!

Note: only agents can comment on the entries, thanks!
Posted by Unknown at 10:01 AM 2 comments:

PITCH: 16-year-old Lailu just wants to open a restaurant specializing
in cooking mystical beasts, but after reneging on a loan shark, she’ll
need her handsome rival’s help to escape the stew she’s in.

Lailu scowled at the row of onions pinned to her far wall, her
calloused fingers idly flipping a large chef's knife end over end
before she turned to look at her remaining batch of onions.  "Don't
worry," she told them quietly, "it will only hurt a second."  As she
selected a sweet yellow one, the bell above her front door chimed.

Lailu whipped around, the onion toppling to the floor in her haste.
“Welcome to Mystic Cooking,” she began eagerly, straightening her
fluffy white chef’s hat.  “Our special today is…” Her eyes flickered
to the man looming in her doorway.  "Oh." Lailu’s heart plummeted back
to her toes.  "It's you."

For all she was barely over five feet tall, Mr. Boss (call me
“Victor”) was not much taller, but his back was straight, and his cane
seemed more like a threatening prop than a tool.  He looked like he
might be in his sixties or seventies, his long gray hair streaked
through with white and oiled back into a ponytail at the nape of his
neck.  She'd heard the rumors, of course, that he was actually two
hundred and six, and that he bathed in the blood of young dragons
every month to slow his aging.  Lailu wasn’t sure she bought that; she
knew how hard it was to kill a dragon.

Mr. Boss glanced at the line of onions pinned to the wall, then
turned, taking in the spotless and very empty dining room.  “Busy, I
see.”
Posted by Unknown at 9:10 AM 1 comment:

Emma’s façade of style and heterosexuality crumples when she hosts Maja, a gay Swedish girl who makes Emma confront her decision to stay closeted out of fear – and her crush on her best friend Kaitlyn.

I had just slammed my locker when Mrs. Galvin’s voice came over the loudspeaker. “Attention students. Report to the auditorium for an assembly. Now!” Really? The one day I was going to be early for Chem?
The halls were jammed, but at least we were all moving in the same direction. I fell in beside Cody. He cleaned his round, wire-frame glasses with the edge of his T-shirt as we walked.
“What’s today’s message?” I asked.
He squinted down at his chest and read, “Haikus are easy/But sometimes they don’t make sense/Refrigerator.”
Cody and I were in most of the same Junior Honors classes. He wore his nerdiness with pride. I covered mine up with makeup and designer knock-offs.
“Profound,” I said. “Not stylish, but profound.”
“We can’t all be smart and trendy at the same time.”
“Right,” Jon said, elbowing in between us. “Life’s too short. Like you.” He punched Cody affectionately on the arm. Jon stood well over six feet; next to Cody he was a giant. Next to everybody, really.
“Could you be a little less friendly?” Cody said, rubbing his arm.
Ignoring him, Jon said, “Hey, Emma, any luck talking your mom out of that Swedish girl’s visit?”
“I wish.” I grimaced.
“I don’t know why you’re not more excited. I think it’d be cool to learn about a different culture up close and personal.”
“Exactly. Up close and personal. I have to share my room with this girl. I won’t have any privacy. There’ll be nowhere to hide.”
Posted by Unknown at 9:09 AM No comments:

PITCH: Between homeschooling, caring for her younger sister, working a loathsome full-time job, and relationship drama, Jack Sunshine doesn’t have time to deal with the undead. Unfortunately for her, the undead rarely wait for an appointment.

If I were smarter, I would have gotten out before things spread. I would have noticed that the kids in our building had something more than a simple cold. My sister Lucy's best friend in our building, a pudgy redhead named Alice, came down with the cough last that I know of in their playgroup, but hers was the most severe. She coughed hard enough to crack a rib, according to her equally chubby and redheaded mother, and was starting to cough up blood with her phlegm. That was when I stopped letting Lucy play with the others.

It was easy enough to ignore the kids in the building getting sick; after all, that was what kids did, sharing their germs amongst themselves like free samples in a grocery store. When older people—people around my age—began coming in to my job with the cough, things became a bit more curious.

I had the misfortune of dealing with other people almost constantly at Caramela, a hipster's paradise of stolen merchandise ideas and overpriced bullshit. Thanks to my lack of higher education, given that I only recently earned a GED, my job prospects weren't particularly good; still, I had to find something better than my previous position as an ice cream scooper at Johnny B's Ice Cream Emporium, which explained why someone like me was working in a clothing store for people nothing like me.

A few days before Halloween, a group of freshman girls rolled in to the store.
Posted by Unknown at 9:08 AM 1 comment: