The Day of THE Call. (How Michelle Wolfson Offered Representation, part II)

When I write in English, I usually riffle through dictionaries or translators.  I also Google stuff to get the voice right, or to find the right word.  When I speak in English—hold on.  I almost NEVER speak in English! And if I do, my tongue trips or my mind goes blank.  Or both.  (Yeah, definitely both.)
So there I was, expecting a Skype video call, which would be held in a language my tongue refused to speak, and the person calling would be this fabulous agent who hadn’t offered representation yet.  At least, she loved my novel, right?  But what if she saw me on her computer screen and, after hearing me make some noises that hardly resembled English, decided I wasn’t a fit, after all?
Talk about nervous.
The night before The Call, I had this Skype rehearsal with my lovely CP, Holly L’oiseau, and she said my English was good.  Of course she was just being nice, but still, it kind of helped me prepare.  It also helped that Michelle said she didn’t mind if I had a thick accent.  And that if it made me feel better, I could even make fun of her own New York accent when we talked.  (That was so sweet, wasn’t it?)
Anyway, the other preparations for The Call weren’t going so well.  My husband was going out of town and was taking with him the only computer with a video camera we have.  To top it off, the ONE computer I managed to borrow was having a Skype strike on me.  Argh.
The morning of The Call, I contacted the computer technician, and after he did some real magic on the borrowed computer, I was all set.  (All set, that is, except for my tripping tongue issues, of course.)  So I had lunch with my three boys—well, more like they had lunch while I stared, since my stomach was too churned-up to tolerate any food—and when The Call was just minutes away, off I went to get the computer.  Only to find out that my five-year-old had locked the room where the PC was.  From the outside. And I had no idea where the key was!
The only way of getting to the computer was to climb up to the terrace of the second floor and enter through the window.  At least I knew it was opened.
Just so you can picture the task, I’ve pasted a photo of my house.  The computer room is the one on the upper right corner. 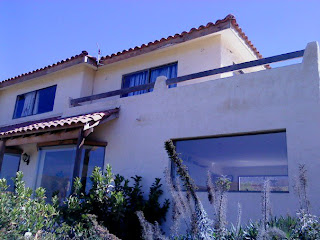 Email ThisBlogThis!Share to TwitterShare to FacebookShare to Pinterest
Labels: Michelle Wolfson, The Call