Hey Guys! Did you know that my friend, Heather McCorkle, is releasing her first novel, The Secret Of SpruceKnoll, this month? To celebrate the book's birthday she's doing a blog tour and contest followed by a live chat on YA Bound  August 30th with a separate giveaway. The blog tour ends August 31st.
I'll tell you what you can win at the end of this post (YES, there are amazing prices!!).
But first, Heather will answer one personal question so that we can get to know her better!
What is a secret hobby of yours that most of us don't know about? 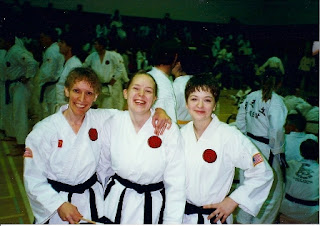 Okay but you have to promise not to tell anyone. Wait, you’re telling everyone aren't you?! LOL! Okay, okay. I love martial arts, have since I was a kid. I'm a second degree (dan) black belt in Tae-kwon-do. Tournaments is one of my favorite things to participate in, though I don't get to do them much anymore since I moved away from civilization.
I'm the middle one in this picture, yep, the one with the goofy grin. :)
(Isn't that awesome! I'm bummed that we only have one picture of Heather like that and we don't have a video of her breaking a board or something. LOL.)


And if you haven't heard about The Secret Of SpruceKnoll, here's the blurb and the OMG-AMAZING cover!! 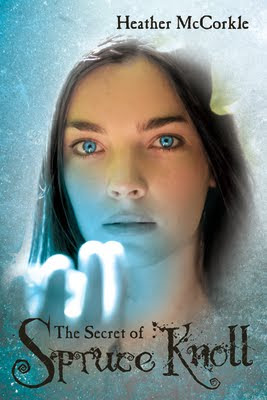 It's hard enough being a teenager under normal circumstances; imagine being orphaned, sent to live with an unfamiliar aunt-and learning that there really is magic in the world. Following the tragic death of her parents, Eren Donovan moves to Spruce Knoll to live with her aunt. Little does Eren know the entire town of Spruce Knoll is filled with so-called "channelers"-a magical group of people who immigrated to the small Colorado town when they were driven out of their own lands.

Channelers are tied to the fate of the world. As the world slowly dies, so do they-and they alone have the power to stop the destruction of Earth. Now, Eren learns she not only lives among them, but she is one. When she meets local boy Aiden, his charming tricks show her being a channeler isn't all bad; in fact, it's kind of cool. But is it Aiden's abilities or Aiden's looks that Eren finds so fascinating?

As Eren and Aiden's relationship blooms, so too does a mystery in Spruce Knoll. The town holds many secrets-and many enemies. It soon becomes apparent that the untimely death of Eren's parents was no accident and that her life might be in danger, too. Only time will tell if young, inexperienced Eren has the power to protect the people she has come to love.

Email ThisBlogThis!Share to TwitterShare to FacebookShare to Pinterest
Labels: Heather McCorkle, The Secret Of Spruce Knoll