Hi, guys! It's going to be Pitch Wars time again this year! And I’ll be mentoring a YA MS for the sixth time ! =D (Details about the contest coming soon.)

For the ones querying, this is a wonderful opportunity to polish your MS and get an agent. Now, gearing up for the contest, you can win a chapter critique by Lorena Hughes. She’s giving this critique away to celebrate that her book, TheSisters of Alameda Street, releases today! She’ll have the critique ready in time for Pitch Wars.

A bit more about my friend Lorena:

Lorena Hughes was born and raised in Ecuador until moving to the U.S. at 18. She has a degree in fine arts and mass communication & journalism from The University of New Mexico. Her previous work won first place at the 2011 Southwest Writers International Contest in the historical fiction category, earned an honorable mention at the 2012 Soul-Making Keats Literary Competition, and was a quarter-finalist for the 2014 Amazon Breakout Novel Award. The Sisters of Alameda Street is her first novel.

I’m really excited about her book! In case you like generational sagas, with some romance and Latin historical fiction, you might want to check it out. 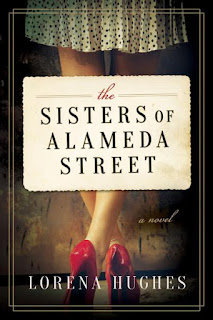 ONE FAMILY, FOUR SISTERS, AND A MYSTERY THAT MIGHT UNRAVEL THEM ALL

When Malena’s tidy, carefully planned world collapses with her father’s mysterious suicide, she finds a letter, signed with an “A,” which reveals that her mother is very much alive in San Isidro—a quaint town tucked in the Andes Mountains. Intent on meeting her, Malena arrives at Alameda Street and meets four unconventional women who couldn’t be more different from one another, but who share one thing in common: all of their names begin with an A.

To avoid a scandal, Malena assumes another woman’s identity and enters their home to discover the truth. Could her mother be Amanda, the iconoclastic widow who opens the first tango nightclub in a conservative town? Ana, the ideal housewife with a less-than-ideal past? Abigail, the sickly sister in love with a forbidden man? Or Alejandra, the artistic introvert scarred by her cousin’s murder? But living a lie will bring Malena additional problems, such as falling for the wrong man and loving a family she may lose when they learn of her deceit. Worse, her arrival threatens to expose long-buried secrets and a truth that may wreck her life forever.

Set in 1960s Ecuador, The Sisters of Alameda Street is a sweeping story of how one woman’s search for the truth of her identity forces a family to confront their own past.

THE GIVEAWAY!
a Rafflecopter giveaway
Posted by Unknown at 11:35 AM