So guys, please give a great applause to Lena Coakley since her book, WITHCLANDERS, hits the shelves today! I had the pleasure of reading an ARC, and I just LOVED it! That's why I asked her if she wanted to do an interview on my blog, and omg, she said, YES!! :D


Lena was born in Milford, Connecticut and grew up on Long Island. In high school, creative writing was the only class she ever failed (nothing was ever good enough to hand in!), but, undeterred, she went on to study writing at Sarah Lawrence College. She got interested in young adult literature when she moved to Toronto, Canada, and began working for CANSCAIP, the Canadian Society of Children’s Authors, Illustrators and Performers, where she eventually became the Administrative Director.  She is now a full-time writer living in Toronto.  Witchlanders is her debut novel. 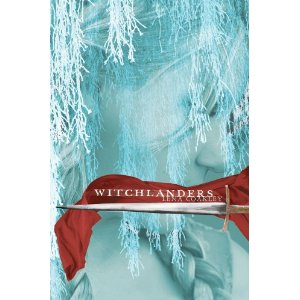 Now, a little bit about her book, which by the way got a starred review from Kirkus!
High in their mountain covens, red witches pray to the Goddess, protecting the Witchlands by throwing the bones and foretelling the future.
It’s all a fake.
At least, that’s what Ryder thinks. He doubts the witches really deserve their tithes—one quarter of all the crops his village can produce. And even if they can predict the future, what danger is there to foretell, now that his people’s old enemy, the Baen, has been defeated?
But when a terrifying new magic threatens both his village and the coven, Ryder must confront the beautiful and silent witch who holds all the secrets. Everything he’s ever believed about witches, the Baen, magic and about himself will change, when he discovers that the prophecies he’s always scorned—
Are about him.
If you liked the synopsis, click on the picture to go to Amazon and buy the book! ;)


1) Could you tell us a bit of how you wrote WITCHLANDERS? (Like, did you outline first? How long did you take? How many drafts? etc.)
When I started WITCHLANDERS, I didn’t know as much about plot as I do now, so I wasn’t terribly successful at making outlines. I tried, but mostly I wrote the first draft by feeling my way along, scene by scene.  That’s the long route, I can tell you!  I outlined again at the beginning of every major revision, and every time I think I understood more about drama, about what makes a story.  WITCHLANDERS was where I learned to write.  No matter how many writing books you read, there is nothing like actually writing a novel to teach you how it’s done.
I’m afraid to actually count how many drafts are on my computer, but I honestly think it is probably close to a hundred.  There are certainly enough cut scenes to make two other books.  That’s not an exaggeration.  I’m a big believer in cutting deep when revising.  In fact, I think the difference between a good writer who is published and a good writer who is not published is often the willingness to be ruthless during the revision process.
I'm not surprised. I mean, when I read WITCHLANDERS, I could tell all the dedication you had put into it :)
2) How many novels have you written?
In my experience, authors often have one to three “trunk novels,” novels that they wrote before their first published book, but that are now languishing in a trunk because they didn’t really work.  (I have it on good authority that one of my favorite authors, Kelley Armstrong, has a dystopian trunk novel hidden away somewhere.  I would PAY to see that!)
If a published author doesn’t have trunk novels, it means that their first novel probably took at least six years because, while they didn’t really know what they were doing, they just couldn’t give up on that first project.  I’m in that category.  WITCHLANDERS was the first novel I completed, but it took me ten years to finish.
I honestly don’t think that one method is better than the other.  In fact, sometimes putting a novel aside and starting another one is absolutely the thing to do.  Aspiring authors can get very burned out revising and revising that first project.  It’s devastating to come to terms with the fact that, after all that work, it might not be the book that is going to get them published, but sometimes it just isn’t.  Of course, if anyone had told me that with WITCHLANDERS I wouldn’t have listened.  I was a dog with a bone!  So any aspiring authors reading this will have to decide if they want to do what I say or do what I did!
That's an inspiring answer!
3) Was it with WITCHLANDERS that you landed your agent?
Yes.  Landing my agent, Steven Malk of Writers House, was probably the best thing that ever happened to me.  He did two years of exclusive revisions with me on WITCHLANDERS before offering me a contract.  I am still in awe of his patience.  That first-time-authors-don’t-know-what-they’re-doing thing?  He totally got that.  I was literally making progress by writing a scene and throwing it out, writing a scene and throwing it out.  I was afraid he’d retire or forget who I was before I finished! I have wonderful beta readers, but his critiques took the book to a whole new level.
4) How long did it take to get the book deal since you started writing seriously?
It depends on what you mean by writing seriously.  Writing WITCHLANDERS wasn’t just where I learned to write, it was where I learned to be a writer.  Ten years ago when this book began, I had a lot of trouble getting to my desk—I had a lot of resistance.  It must have taken me at least three years to figure out how to have the discipline to be productive.  I’m going to say ten years, but learning to write seriously was a gradual process.
I'm so glad you never gave up!
Now a couple of questions just for fun.
- Guilty pleasure? (That has nothing to do with books.)
Oh, I adore going out to lunch, and I do it far too often.  I don’t need to go with friends, either; I’m perfectly happy to sit in a restaurant by myself. Ummm.  I’m actually doing it right now as I right this!
- Can you tell us something fun about you that we probably don't know?
When I was in High School, I sang in a backup choir for Barry Manilo.  I even got to sing at Radio City Music Hall!
That's lovely!
Thanks so much!! I'm really excited about this interview! <3

Thanks so much for having me on your blog, Monica!!!

PS: I'll post the winners (from the contest with agent Vickie Motter) this week.